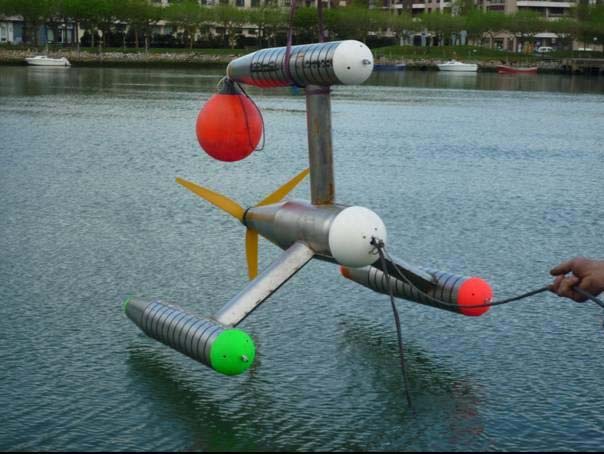 The new devices using the energy from marine currents in great depths pose the problem of high cost of manufacturing, installation and maintenance. To tackle this issue, members of the Technological Research Group in Marine Renewable Energy (GITERM) at UPM have developed a method to assess the life-cycle cost of a power generation park based on these devices that can be used in the early design stages. The procedure has been recently published in the Renewable and Sustainable Energy Reviews.

“Our GESMEY device, patented by the University, has been the first design worldwide tested in the sea and fit to operate fully submerged.”

After a wide development of offshore wind power, experts agree that the next step is the use of the energy from marine currents, mainly produced by the tides. Today, Europe and Canada are starting to install the first experimental parks based on devices set on the seabed, called of the first generation.

It is estimated that about 80{87a18df7a28eb56c6a7dc02e4e1a3d322672f7d5de2b418517971f2bf2603901} of the energy from tides are located in areas of over 40 meters of depth. Therefore it is necessary to use a new design device that can operate in areas where it is expensive to install first generation devices such as large structures held to the seabed. These systems of the second generation have anchors and a series of cables that hold the device to the seabed.

Amable López is a researcher from the GITERM group at the School of Naval Engineering at UPM and says, “Our GESMEY device, patented by the University, has been the first design worldwide tested in the sea and fit to operate fully submerged. Thanks to the cost analysis tool, we were able to assess diverse design alternatives with a final goal: to reduce as much as possible the production cost of the energy and to make this renewable source both financially and technically competitive, helping fight against climate change”.

These economic analyses are added to the development of new anchoring systems that use simpler and more robust systems, such as the ones shown in the article published this year in the Revista Iberoamericana de Automática e Informática industrial. Powerful tools of simulation and control are used to develop these systems, which were also developed by the GITREM group.

Thanks to these procedures and tools, the initial design of the GESMEY device and its anchoring system has evolved from generators with a large rotor (similar to the ones used in wind generators) to generators with several rotors, such as the Hive-TEC device (also patented by UPM) allowing to reduce the estimated cost of the energy produced by 30{87a18df7a28eb56c6a7dc02e4e1a3d322672f7d5de2b418517971f2bf2603901}.

The research group keeps working to achieve a future successful commercialization of tidal renewable energy devices since they have a great potential to generate power from the marine currents. José Andrés Somolinos, another researcher from GITERM says, “the energy from currents is a renewable source that has an additional value in a future energy market regarding other renewable energy sources due to its high predictability. Besides, tidal energy technologies are characterized by a CO2-free energy that contributes to the economic growth and job creation in coastal and remote areas”.