Particle Accelerator On A Chip 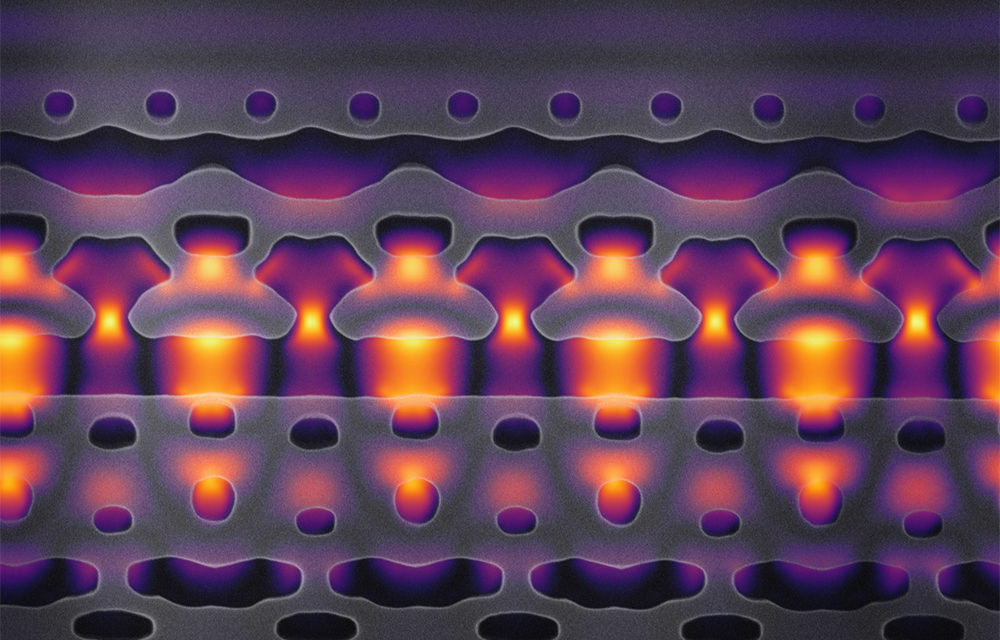 Stanford researchers build a particle accelerator that fits on a chip, miniaturizing a technology that can now find new applications in research and medicine

Just as engineers once compressed some of the power of room-sized mainframes into desktop PCs, so too have Stanford researchers shown how to pack some of the punch delivered by today’s ginormous particle accelerators onto a tiny silicon chip.

On a hillside above Stanford University, the SLAC National Accelerator Laboratory operates a scientific instrument nearly 2 miles long. In this giant accelerator, a stream of electrons flows through a vacuum pipe, as bursts of microwave radiation nudge the particles ever-faster forward until their velocity approaches the speed of light, creating a powerful beam that scientists from around the world use to probe the atomic and molecular structures of inorganic and biological materials. 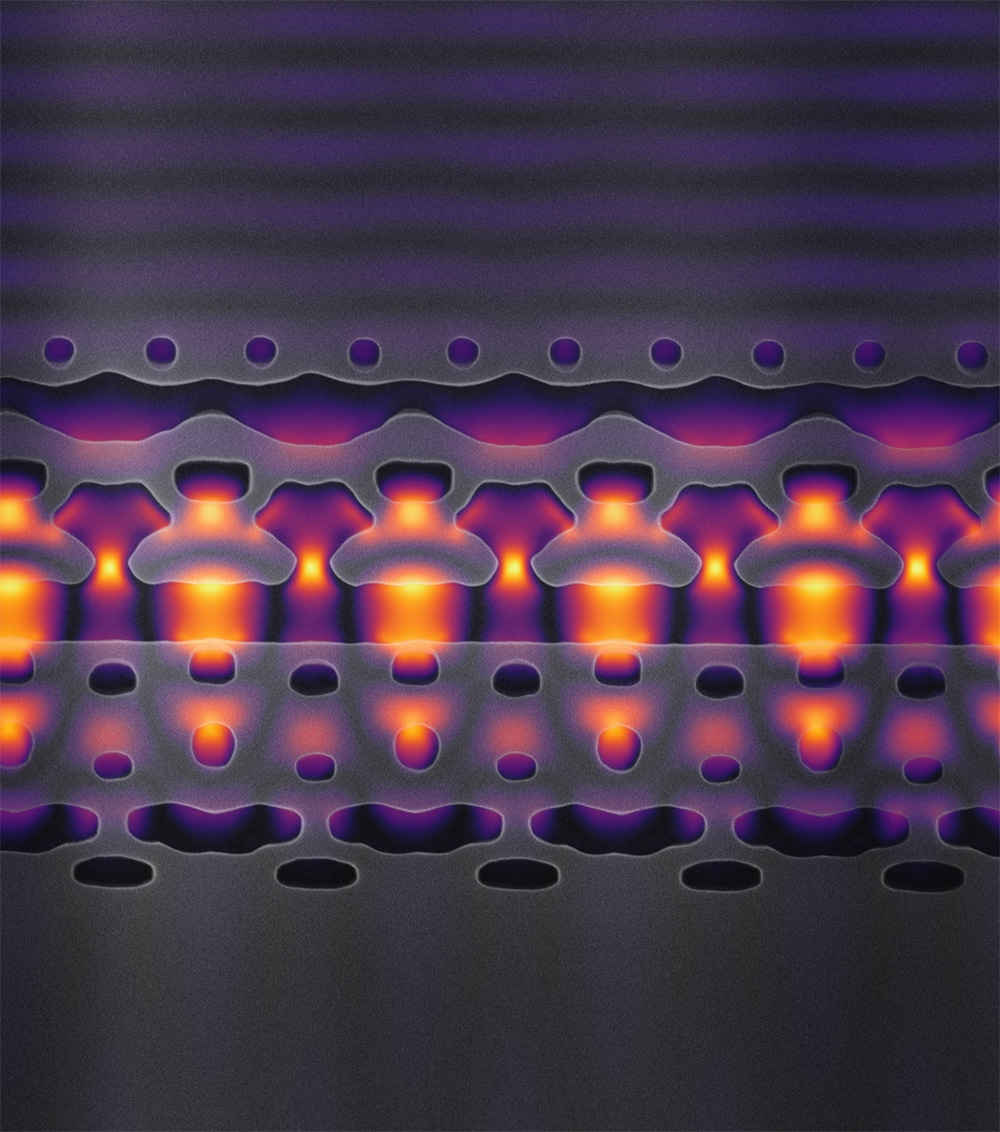 This image, magnified 25,000 times, shows a section of an accelerator-on-a-chip. The gray structures focus infrared laser light (shown in yellow and purple) on electrons flowing through the center channel. By packing 1,000 channels onto an inch-sized chip, Stanford researchers hope to accelerate electrons to 94 percent of the speed of light. (Image credit: Courtesy Neil Sapra)

Now, for the first time, scientists at Stanford and SLAC have created a silicon chip that can accelerate electrons – albeit at a fraction of the velocity of that massive instrument – using an infrared laser to deliver, in less than a hair’s width, the sort of energy boost that takes microwaves many feet.

Writing in the Jan. 3 issue of Science, a team led by electrical engineer Jelena Vuckovic explained how they carved a nanoscale channel out of silicon, sealed it in a vacuum and sent electrons through this cavity while pulses of infrared light – to which silicon is as transparent as glass is to visible light – were transmitted by the channel walls to speed the electrons along.

The accelerator-on-a-chip demonstrated in Science is just a prototype, but Vuckovic said its design and fabrication techniques can be scaled up to deliver particle beams accelerated enough to perform cutting-edge experiments in chemistry, materials science and biological discovery that don’t require the power of a massive accelerator.

“The largest accelerators are like powerful telescopes. There are only a few in the world and scientists must come to places like SLAC to use them,” Vuckovic said. “We want to miniaturize accelerator technology in a way that makes it a more accessible research tool.”

Team members liken their approach to the way that computing evolved from the mainframe to the smaller but still useful PC. Accelerator-on-a-chip technology could also lead to new cancer radiation therapies, said physicist Robert Byer, a co-author of the Science paper. Again, it’s a matter of size. Today, medical X-ray machines fill a room and deliver a beam of radiation that’s tough to focus on tumors, requiring patients to wear lead shields to minimize collateral damage.

“In this paper we begin to show how it might be possible to deliver electron beam radiation directly to a tumor, leaving healthy tissue unaffected,” said Byer, who leads the Accelerator on a Chip International Program, or ACHIP, a broader effort of which this current research is a part.

In their paper, Vuckovic and graduate student Neil Sapra, the first author, explain how the team built a chip that fires pulses of infrared light through silicon to hit electrons at just the right moment, and just the right angle, to move them forward just a bit faster than before.

To accomplish this, they turned the design process upside down. In a traditional accelerator, like the one at SLAC, engineers generally draft a basic design, then run simulations to physically arrange the microwave bursts to deliver the greatest possible acceleration. But microwaves measure 4 inches from peak to trough, while infrared light has a wavelength one-tenth the width of a human hair. That difference explains why infrared light can accelerate electrons in such short distances compared to microwaves. But this also means that the chip’s physical features must be 100,000 times smaller than the copper structures in a traditional accelerator. This demands a new approach to engineering based on silicon integrated photonics and lithography.

Vuckovic’s team solved the problem using inverse design algorithms that her lab has developed. These algorithms allowed the researchers to work backward, by specifying how much light energy they wanted the chip to deliver, and tasking the software with suggesting how to build the right nanoscale structures required to bring the photons into proper contact with the flow of electrons.

“Sometimes, inverse designs can produce solutions that a human engineer might not have thought of,” said R. Joel England, a SLAC staff scientist and co-author on the Science paper.

The design algorithm came up with a chip layout that seems almost otherworldly. Imagine nanoscale mesas, separated by a channel, etched out of silicon. Electrons flowing through the channel run a gantlet of silicon wires, poking through the canyon wall at strategic locations. Each time the laser pulses – which it does 100,000 times a second – a burst of photons hits a bunch of electrons, accelerating them forward. All of this occurs in less than a hair’s width, on the surface of a vacuum-sealed silicon chip, made by team members at Stanford.

The researchers want to accelerate electrons to 94 percent of the speed of light, or 1 million electron volts (1MeV), to create a particle flow powerful enough for research or medical purposes. This prototype chip provides only a single stage of acceleration, and the electron flow would have to pass through around 1,000 of these stages to achieve 1MeV. But that’s not as daunting at it may seem, said Vuckovic, because this prototype accelerator-on-a-chip is a fully integrated circuit. That means all of the critical functions needed to create acceleration are built right into the chip, and increasing its capabilities should be reasonably straightforward.

The researchers plan to pack a thousand stages of acceleration into roughly an inch of chip space by the end of 2020 to reach their 1MeV target. Although that would be an important milestone, such a device would still pale in power alongside the capabilities of the SLAC research accelerator, which can generate energy levels 30,000 times greater than 1MeV. But Byer believes that, just as transistors eventually replaced vacuum tubes in electronics, light-based devices will one day challenge the capabilities of microwave-driven accelerators.

Meanwhile, in anticipation of developing a 1MeV accelerator on a chip, electrical engineer Olav Solgaard, a co-author on the paper, has already begun work on a possible cancer-fighting application. Today, highly energized electrons aren’t used for radiation therapy because they would burn the skin. Solgaard is working on a way to channel high-energy electrons from a chip-sized accelerator through a catheter-like vacuum tube that could be inserted below the skin, right alongside a tumor, using the particle beam to administer radiation therapy surgically.

“We can derive medical benefits from the miniaturization of accelerator technology in addition to the research applications,” Solgaard said.