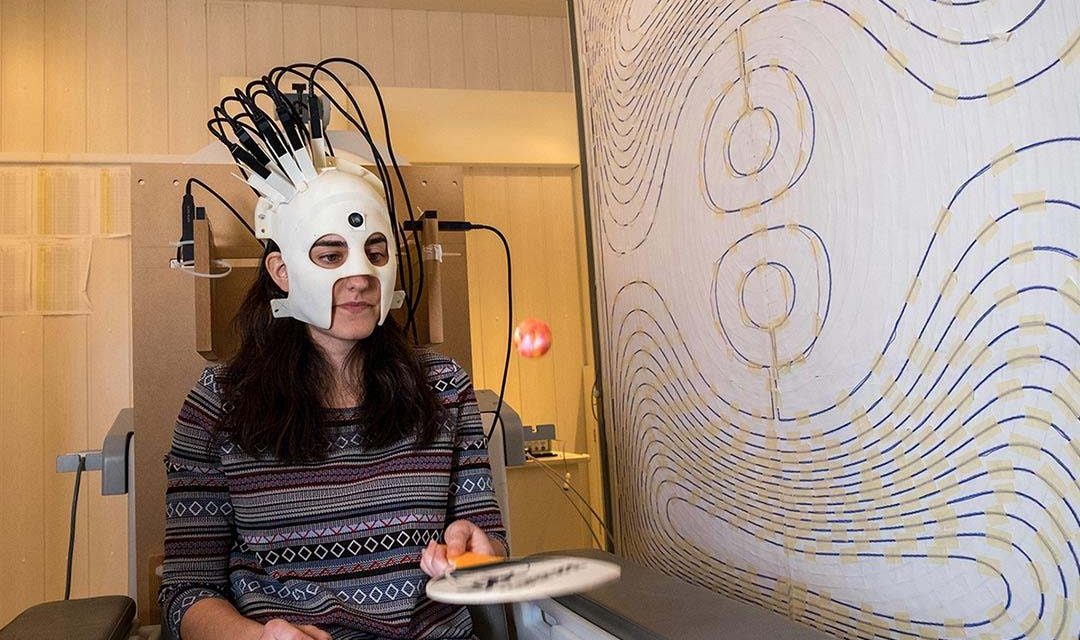 A new generation of brain scanner, that can be worn like a helmet allowing patients to move naturally whilst being scanned, has been developed by researchers at the Sir Peter Mansfield Imaging Centre, University of Nottingham and the Wellcome Centre for Human Neuroimaging, UCL. It is part of a five-year Wellcome funded project which has the potential to revolutionise the world of human brain imaging

In a Nature paper, the researchers demonstrate that they can measure brain activity while people make natural movements, including nodding, stretching, drinking tea and even playing ping pong. Not only can this new, light-weight, magnetoencephalography (MEG) system be worn, but it is also more sensitive than currently available systems.The researchers hope this new scanner will improve research and treatment for patients who can’t use traditional fixed MEG scanners, such as young children with epilepsy or patients with neurodegenerative disorders like Parkinson’s disease.Brain cells operate and communicate by producing electrical currents. These currents generate tiny magnetic fields that are detected outside the head. Researchers use MEG to map brain function by measuring these magnetic fields. This allows for a millisecond-by-millisecond picture of which parts of the brain are engaged when we undertake different tasks, such as speaking or moving.

Current MEG scanners are large and weigh around half a tonne. This is because the sensors used to measure the brain’s magnetic field need to be kept very cold (-269°C) which requires bulky cooling technology. With current scanners, the patient must remain very still whilst being scanned, as even a 5-mm movement can make the images unusable. This means it is often difficult to scan people who find it hard to remain still such as young children, or patients with movement disorders. It also poses problems when one might need a patient to remain still for a long time in order to capture a rarely occurring event in the brain, such as an epileptic seizure.

“MEG is a really valuable tool in neuroscience, but current scanners are still not widely used as they’re expensive, cumbersome and their ‘one-size-fits-all’ design doesn’t work for many patients.”

These problems have been solved in the new scanner by scaling down the technology and taking advantage of new ‘quantum’ sensors that can be mounted in a 3D-printed prototype helmet. As the new sensors are very light in weight and can work at room temperature, they can be placed directly onto the scalp surface. Positioning the sensors much closer to the brain increases the amount of signal that they can pick up.

The light-weight nature of the new scanner also means that, for the first time, subjects can move their heads during the scanning. However, the quantum sensors will only operate in this way when the Earth’s magnetic field has been reduced by a factor of around 50,000. To solve this problem, the research team developed special electromagnetic coils, which helped to reduce the Earth’s field around the scanner. These coils were designed specifically to sit either side of the subject, and close to the walls of the room, to ensure that the scanner environment is not claustrophobic.

The scanner is based around helmets that can be made to fit anyone who needs to be scanned. Following success of their prototype system, the researchers are now working towards new styles of helmet, which will have the appearance of a bicycle helmet, that will be suitable for babies and children as well as adults. The researchers predict this new type of scanner will provide a four-fold increase in sensitivity in adults, potentially increasing to 15 or 20-fold with infants.

Professor Gareth Barnes, who leads the project at the Wellcome Trust Centre for Human Neuroimaging at UCL, said: “This has the potential to revolutionise the brain imaging field, and transform the scientific and clinical questions that can be addressed with human brain imaging. Our scanner can be worn on the head like a helmet, meaning people can undertake tasks whilst moving freely. Importantly, we will now be able to study brain function in many people who, up until now, have been extremely difficult to scan – including young children and patients with movement disorders. This will help us better understand healthy brain development in children, as well as the management of neurological and mental health disorders”

Dr Matt Brookes who leads the MEG work in Nottingham, where the prototype was built, said: “This new technology raises exciting new opportunities for a new generation of functional brain imaging. Being able to scan individuals whilst they move around offers new possibilities, for example to measure brain function during real world tasks, or genuine social interactions. This has significant potential for impact on our understanding of not only healthy brain function but also on a range of neurological, neurodegenerative and mental health conditions.”

Professor Richard Bowtell, Director of the Sir Peter Mansfield Imaging Centre in Nottingham added “It’s great to see this collaboration between neuroscientists, engineers and physicists from two different universities producing a potential step-change in brain scanning technology. This was made possible by a Wellcome Collaborative Award which is an important funding stream that aims to promote the development of new ideas and speed the pace of discovery”

Andrew Welchman, Wellcome’s Head of Neuroscience and Mental Health, said: “MEG is a really valuable tool in neuroscience, but current scanners are still not widely used as they’re expensive, cumbersome and their ‘one-size-fits-all’ design doesn’t work for many patients. This new scanner is exciting not only because it overcomes those issues and will help improve our understanding of how the brain works but also because it has huge potential for clinical use. This could lead to better care for patients, such as young children and people with epilepsy where current options are severely limited and very invasive.”